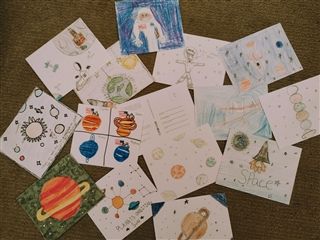 The Aquinas 6th graders recently wrote postcards that will take a trip to space! The opportunity is made possible through a group called Club for the Future. Mrs. Baschnagel thought this would be a great way to engage her 6th grade science students who are currently working on projects about the different planets.
So how exactly does this work? Well, Mrs. Baschnagel had each student write or draw their vision on a postcard for what they think the future of life in space will look like and mailed the postcards back to Club for the Future. Now, they will be placed into a payload box and loaded into the crew capsule of the New Shepard rocket, which launches to space from the West Texas desert. The capsule, carrying our AQ student postcards, will separate from the booster as it reaches space and then New Shepard’s reusable booster will return for a gentle touchdown on the landing pad. The capsule then returns to Earth under parachutes after floating 100 kilometers above our planet. The postcards will be recovered, stamped "Flown to Space," and returned to our AQ students.

Sixth grader Analise Napolitano said “It’s really cool, I’m excited to have a souvenir from space.” Once her postcard returns, Analise plans to display it in her room at home.