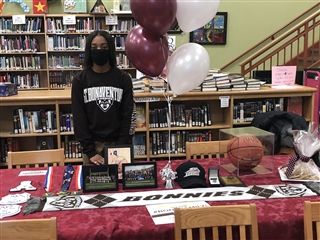 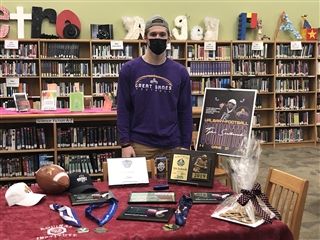 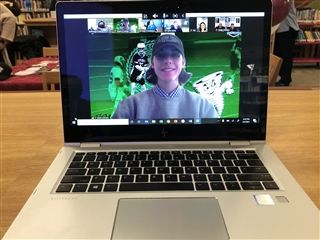 
Three of Aquinas Institute’s most gifted senior athletes signed national letters of intent to play Division I and II collegiate sports at a ceremony held on Wednesday, February 3. The student-athletes included Chanel Alexander, Tyler Szalkowski, and Gavin Conlan.
Chanel Alexander will attend St. Bonaventure University this fall on an academic and soccer scholarship. Throughout her high school career, Chanel has strived for academic, personal, and athletic excellence. She has consistently made Honor Roll every quarter at AQ, volunteers her time alongside her grandmother at the American Red Cross, and excels as a three-season athlete in basketball, lacrosse, and soccer.
Chanel’s success on the soccer field as a four-year varsity player for the Li’l Irish earned her many top honors including a 2017 Section V and State Championship; 2018, 2019 and 2020 Private-Parochial League Division I First Team; 2018, 2019 and 2020 All-State Girls’ Soccer Team; 2020 All-Greater Rochester Player of the Year​, and 2020 Private-Parochial Division I Player of the Year.​
Tyler Szalkowski will attend the University at Albany this fall where he will play Division I football. Tyler’s full athletic scholarship comes after a successful high school career as a three-year varsity starter at quarterback.
Throughout his time at Aquinas, Tyler not only helped the Li’l Irish advance to two sectional title wins, but also the Class AA State Football Championship in 2018. In addition to the state title that year, Tyler was named 2nd Team All Greater Rochester, All-State Honorable Mention, Aquinas Football Offensive Rookie of the Year and Aquinas Football Special Teams Player of the Year.
He continued to earn accolades in the 2019 season, which included Section V Offensive Player of the Year, Aquinas Football Most Valuable Player, Section V Offensive Player of the Week, First Team All-Greater Rochester, All County First Team, and Second Team All-State. Additionally, he was named a Playmakers Podcast Super 25 Quarterback in 2018 and Offensive Player of the Year in 2019.​ Tyler’s position at quarterback made him a natural leader of the team. He proudly served as team captain his junior and senior year.
​  ​
Tyler has been a regular Honor Roll Student at Aquinas and is involved in student council, the student ambassador program, and volunteers for Camp Good Days, the YMCA, and Aquinas youth sports camps.

Gavin Conlan will be attending Lake Erie College in Painesville, Ohio this coming fall to study business and play lacrosse.

Gavin has been part of Aquinas’ lacrosse program since 7th grade. At the time, he played longstick middie for Aquinas’ modified team while still a student at Siena Catholic Academy. His experience with the coaching staff and players was what led him to transfer to Aquinas the following year. As an 8th grader, the modified team needed a goalie and he stepped forward.

Highlights from Gavin’s AQ lacrosse career include earning the “Can Do” award given to him by his coaches, being selected as the Connors & Ferris Defensive player of the week in April 2019, as well as earning the Greater Rochester Area Lacrosse League honorable mention for Goalie. The past two summers Gavin has represented the Class of 2021 in the New York State Regional Lacrosse Championships for Western New York.
Since enrolling at Aquinas, Gavin has been an honor roll student every marking period and earned Winter Scholar Athlete recognition. Gavin has participated in a number of extracurricular and additional athletic programs at Aquinas including DECA, student ambassadors, student council, football, hockey, and bowling.
Gavin has volunteered with numerous organizations in the Greater Rochester Area, and offers his time and talent to help other youth lacrosse players.