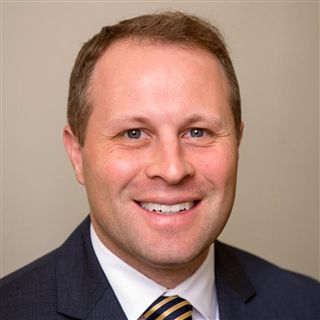 Rochester, NY (January 16, 2020) – The Chairman of the Aquinas Board of Trustees, Jim Brennan ’88 announced today that Dr. Anthony Cook ‘99 has been named the third president in Aquinas’ illustrious 118-year history.

This past September, Aquinas welcomed Dr. Cook back to his alma mater to take on the role of executive director of alumni relations and development, and with him, he brought an impressive resume reflecting a professional career dedicated to Catholic education. Dr. Cook served as superintendent of schools for the Diocese of Rochester (2013-2019), principal of Seton Catholic School in Brighton (2012-2013), as well as middle school dean of students and teacher at Aquinas (2004-2011).

However, for as impressive as all of his accomplishments are, they may pale in comparison to the love, dedication, and commitment he has to Aquinas. Since Dr. Cook stepped on campus in September 1995, as a freshman, he has been a fixture at the Dewey Avenue school. Upon graduation from college, he returned to Aquinas as a social studies teacher and a track and field coach. Even after leaving Aquinas for positions within the Diocese of Rochester, Dr. Cook could often be found at various school events and competitions. Whether he was simply supporting his alma mater, or announcing a basketball game, he was always around wearing his maroon and white with pride.

“As the oldest of four Aquinas graduates in my family, this school holds a very special place in my heart,” Dr. Cook said. “I attribute so much of the success that I have had in both my professional and personal life to the outstanding education that I received at Aquinas.

“To be named president of such a special place is easily the proudest moment of my professional career. I am so excited, thrilled and honored to be in a position where I will be able to help shape and strengthen the direction of Aquinas, and positively impact our wonderful students for many years to come.”

Dr. Cook will replace Michael R. Daley ’79, who announced in September that he will be retiring after serving as the school’s president for 17 years. Building on the legacy of President Daley, Dr. Cook will look to strengthen Aquinas’ endowment of $22 million, while highlighting the Aquinas presence in the community, and continuing to prepare our students to attend top colleges and universities.

“Mike Daley has done so much for Aquinas, and I am humbled to be his successor,” Dr. Cook said. “He has always put our students first, as we have always strived and will continue to strive to provide our students with the latest tools, technology and opportunity to get an outstanding Catholic education that strongly prepares them for college and beyond.”

Dr. Cook comes in as president at one of the most exciting times in the long-standing history of Aquinas. In order to enhance the college prep experience for our students, in the spring of 2021 Aquinas will complete the transition to a Regents-free curriculum more focused on preparing our students academically, spiritually and socially for education at the next level. Aquinas has also implemented a Capstone program that strengthens our academic profile and connects our students with the local community.

As president, Dr. Cook will also oversee campus upgrades including adding a STREAM center this summer that will highlight the school’s new augmented and virtual reality lab (AR/VR). This center will serve to enhance Aquinas’ STREAM-based curriculum that focuses on science, technology, religion, engineering, arts, and mathematics.