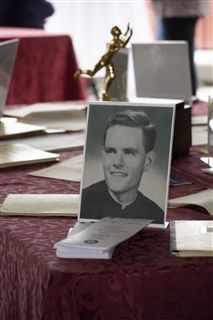 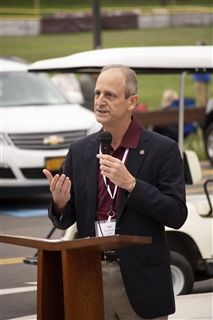 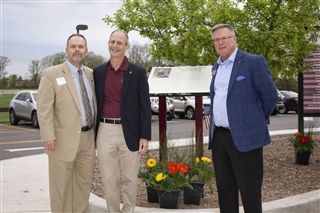 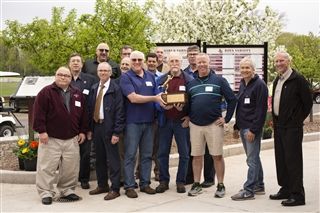 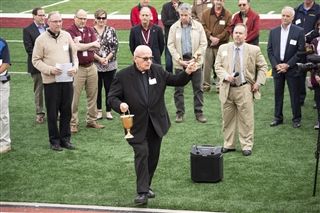 The Aquinas Institute of Rochester formally dedicated and named the school’s new outdoor track at a ceremony held on Thursday, May 16 at Aquinas’ Wegman Stadium. The ceremony coincided with the Private Parochial League Track and Field Championships that took place at Aquinas that day.

With the generous support of Aquinas alumnus Ed Fiorentino ’76, the new eight-lane, 400-meter, all-weather running track installed in August 2018, was named after track coach, teacher and mentor Father J. Michael Wesley, CSB ’57. Fiorentino said, "Father Wesley's greatest contributions went well beyond track and field. He loved Aquinas and he loved to teach. For so many of us, he personified what was great about Aquinas. It was about being a part of something bigger than yourself."

Father Wesley was a long-time track and field coach at Aquinas. He was a driving force behind the fledgling indoor track program and the success of the Aquinas Relays where he served as Meet Director for many years. Under his direction, the Aquinas Relays became a premier event that attracted top teams from throughout New York State. Father Wesley was a major advocate for the participation of Catholic schools in Sectional events and championship tournaments; his efforts helped Aquinas capture its first-ever Section V Championship, in any sport, with a track and field title in 1976. He is a member of the Section V Track and Field Hall of Fame as a Coach, the Aquinas Hall of Fame, as well as the New York State Track Officials Hall of Fame.

The dedication ceremony included remarks from Aquinas President Michael Daley ’79 and track benefactor Ed Fiorentino ’76, an unveiling of the new dedication plaque, and a blessing of the track by Fr. Ronald Schwenzer, CSB ’57.