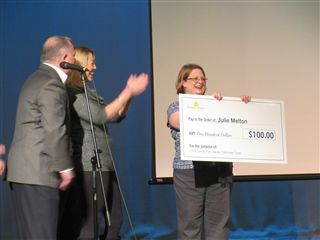 Will use grant to purchase Breakout EDU kits
After applying for a $100 teacher grant through Family First Credit Union, Aquinas Librarian Julie Melton, waited to hear if she had won. When the October 31 notification deadline came and went with no word, Mrs. Melton decided that she would just try again next year. Little did she know, Family First Credit Union was waiting to surprise her in front of the entire school, which they did the morning of November 13.

“I was so surprised,” said Mrs. Melton after receiving her grant check at Aquinas’ weekly school gathering in the auditorium. As far as what she plans to do with the grant, Mrs. Melton is going to purchase Breakout EDU kits for Aquinas students and teachers to use.

Breakout EDU is a series of ultra-engaging learning games that emphasize teamwork, problem solving, and critical thinking by presenting participants with sets of challenges. Once they master one challenge, they will continue onto the next until the puzzle (or game) is solved (or won).


Mrs. Melton is choosing to use the grant money on a Breakout EDU box because “it’s unusual and different, and active and participatory. This actually makes the kids communicate, collaborate, argue and problem solve, which are all skills that I think they can work on.”


In just two years as librarian at Aquinas, Mrs. Melton has already made the library a more interactive and self-directed learning environment. Last year she introduced students to Makerspace, a place where young people have an opportunity to explore their own interests; learn to use tools and materials, both physical and virtual; and develop creative projects. It’s DIY meets education. Mrs. Melton brought the program to AQ so that students had a space to experiment, create and have fun. The different stations included robots, K'Nex, snap circuits, sewing, origami, coloring, crafting, drawing and more. After much success, she held another Makerspace this past October with others planned for this school year.

“I want the library to be a place for creative thought, expression and growth and have it be a positive experience,” said Mrs. Melton. “We’re not just books for people who like to read, we can offer so much more.”